Air quality in Jakarta is improving, for now 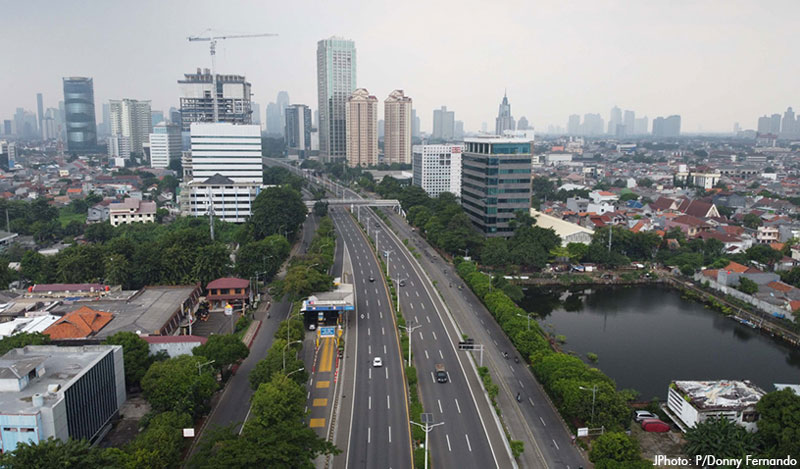 With many people currently staying at home most of the time to prevent the spread of the coronavirus, Jakarta has reported a slight improvement in air quality. Experts have urged the authorities to use the opportunity to redesign human activities and city development to achieve a lasting effect.

According to the agency’s data, the concentration of PM2.5 particulate matter, inhalable pollutant particles less than 2.5 micrometers in diameter, was below 40 micrograms per cubic meter on March 26, down from more than 60 mcg/cbm on March 19.

Environmental group the Committee for the Phasing Out of Leaded Fuel (KPBB), which monitors data from United States-based air-quality website AirNow, says the yearly average PM2.5 concentration in Central Jakarta in 2019 was 40.10 mcg/cbm. The daily average was 30.13 mcg/cbm from March 16 to 25 this year and 15.48 mcg/cbm from March 26 to April 4.

The maximum daily PM2.5 level set by the government is 65 mcg/cbm, while the yearly standard is 15 mcg/cbm, far higher than the World Health Organization’s (WHO) standards with a maximum daily exposure to PM2.5 of 25 mcg/cbm and yearly average of 10 mcg/cbm.

The KPBB’s Ahmad Safruddin said the unintended slightly cleaner air thanks to physical distancing might be a boon to the public, but it was just temporary, and air pollution might be worse once the city returns to normal activities.

“Without redesigns of development, industry, transportation and energy activities that will push them to control emissions and reduce energy consumption, this will only be temporary,” Ahmad said. “Once the curve of COVID-19 cases starts to slope downward, the government will try to push the economy to return [to its previous level of activity].”

Finance Minister Sri Mulyani previously said that the country’s economic growth was predicted to be 2.3 percent in 2020, with the worst-case scenario being minus 0.4 percent. Last year, Statistics Indonesia (BPS) recorded national economic growth of 5.02 percent.

Ahmad also criticized a newly launched regulation in lieu of law (Perppu) on COVID-19, which lays out plans and policies to stimulate the economy after the pandemic but includes no measures to protect the environment.

“It will give the industry some leeway to resume operations, which in turn will cause pollution again,” he said, suggesting the government instead introduce incentives for businesses which were planning to reduce gas emissions or convert to renewables for efficiency following the COVID-19 pandemic.

The air over Jakarta has become increasingly polluted since 2018, hitting a new low in 2019, when the city was named the fifth-most-polluted capital in the world, according to the 2019 World Air Quality Report by air-quality data provider AirVisual. The report found that Jakarta’s air pollution had increased 66 percent over two years, with the annual concentration of PM2.5 increasing from 29.7 mcg/m³ in 2017 to 49.4 mcg/m³ in 2019.

During the physical distancing period, Jakarta still recorded unhealthy levels of air quality, according to AirVisual data. For example, Jakarta’s Air Quality Index (AQI) was recorded on Sunday at 114, or “unhealthy for sensitive groups”, with a PM2.5 concentration of 41 mcg/cbm. On Monday it was at 113 with 40.2 mcg/cbm.

According to the Jakarta Environment Agency, 75 percent of pollution came from land transportation, 9 percent from heaters and electric generators, 8 percent from industries, and 8 percent from domestic activities.

“This raises another question, why, despite traffic easing [due to physical distancing], has the PM2.5 level remained high?” Greenpeace Indonesia’s climate and energy campaigner Bondan Andriyanu asked.

Bondan said there were many other factors that could contribute to what he described as “a minor improvement” in air quality, such as the wind speed and increasing rainfall sweeping away pollutants.