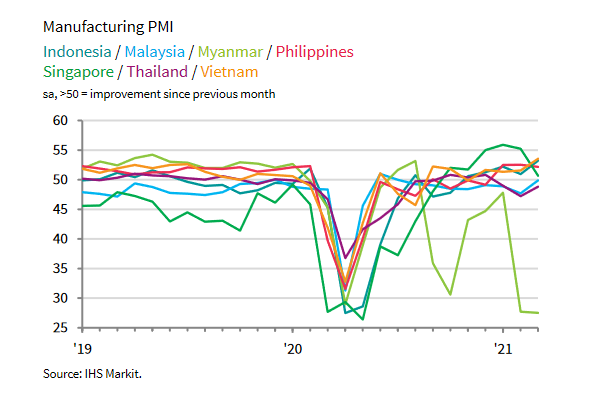 The manufacturing sector in the ASEAN bloc returned to growth in March this year, the IHS Markit Purchasing Managers’ Index (PMI) showed in April.

The headline PMI rose from 49.7 in February to 50.8 in March, returning back above the neutral 50.0 mark. This signalled a renewed, albeit slight, improvement in manufacturing conditions across ASEAN, IHS Markit said.

After slight drops in February 2021, the ASEAN manufacturing sector’s output and new orders rose in March, the index data showed.

Business confidence also rose during March, to the highest in three months.

The strongest rise in the manufacturing PMI in March was seen in Vietnam, where the headline figure of 53.6 pointed to a fourth monthly improvement in a row. Indonesia, the Philippines, and Singapore also registered sustained growth during March. In the Philippines, the headline index reached a survey record high since April 2011 of 53.2 and signalled a robust rate of expansion, according to IHS Markit data.

“The ASEAN manufacturing sector saw a fresh improvement in conditions at the close of the first quarter, with growth driven by renewed increases in both output and inflows of new work following slight falls in February,” said Lewis Cooper, Economist at IHS Markit, commenting on the survey results.