ASEAN’s Manufacturing Rebound Continues in May 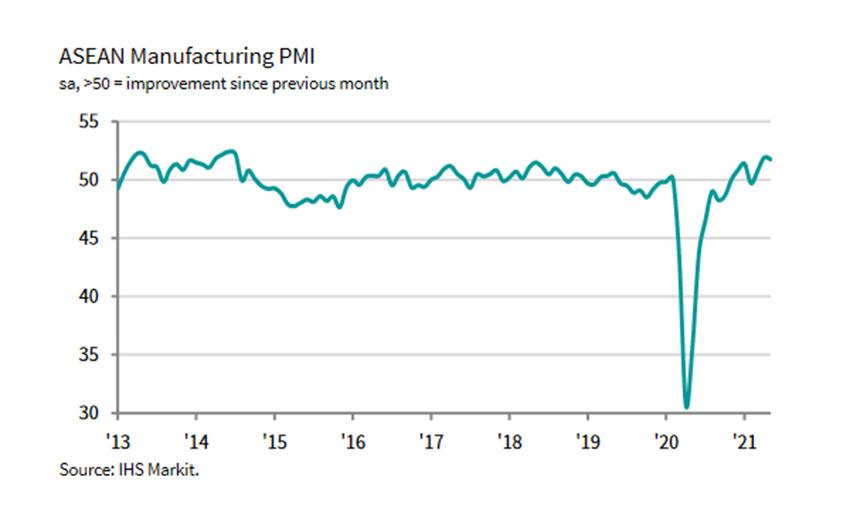 The manufacturing sector in ASEAN continued to recover in May, posting the second strongest conditions for the industry since July 2014, the latest IHS Markit Purchasing Managers’ Index (PMI) data showed on 2 June.

The headline PMI reading was at 51.8 in May, down only slightly from 51.9 in April, to signal a third straight monthly improvement in ASEAN manufacturing conditions, IHS Markit noted.

In May 2021, both output and new orders rose for the third month in a row. The growth rate slowed only slightly compared to April and remained strong overall.

However, supply chains came under pressure, as supplier delays were the longest in a year.

Indonesia led growth in ASEAN’s manufacturing sector in May, as its PMI hit a series record high of 55.3 and pointed to a sharp improvement in conditions. Vietnam also registered robust growth, despite the fact that the headline PMI slipped slightly from April’s near two-and-a-half-year high, IHS Markit said.

After a slight decline in April, Singapore returned to growth in May with the headline index at 51.7, the highest for three months. Malaysia also registered growth in May, for a second consecutive month.

“The ASEAN manufacturing sector continued to recover during May, with sustained upturns in both output and new work. The rates of growth cooled slightly on the month, but were still strong overall,” said Lewis Cooper, Economist at IHS Markit, commenting on the latest survey results.

“Overall, May data pointed to another decent performance for the ASEAN manufacturing sector, with sustained growth helping to regain the ground lost due to the pandemic,” Cooper noted.