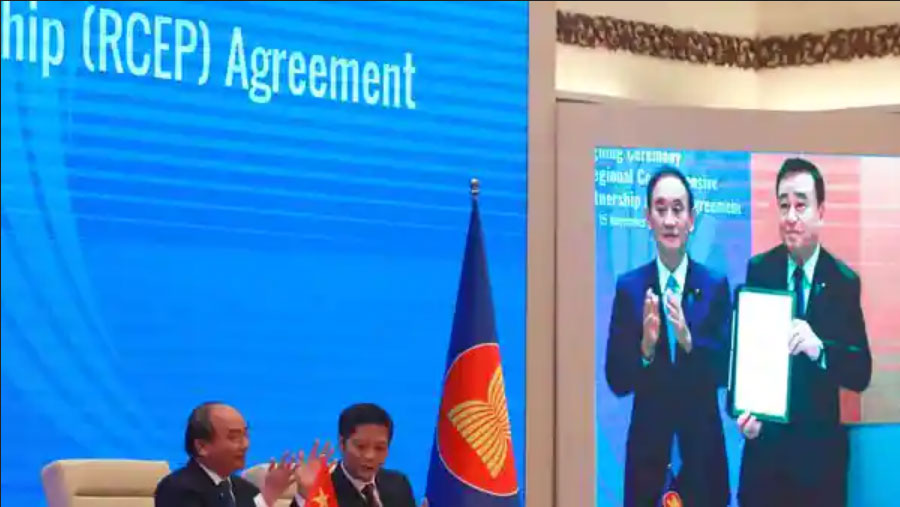 The Regional Comprehensive Economic Partnership (RCEP) Agreement, which entered into force on 1 January 2022, has the potential to contribute significantly to the post-pandemic recovery efforts of the ASEAN member states, the economy ministers of the Southeast Asian bloc highlighted in their special meeting in Bali on 18 May.

The Meeting encouraged the remaining signatory States to expedite their ratification of the RCEP Agreement, the ministers said at the end of their summit in Indonesia.

The ASEAN member states – Brunei Darussalam, Cambodia, Indonesia, Lao PDR, Malaysia, Myanmar, the Philippines, Singapore, Thailand, and Vietnam – plus Australia, China, Japan, South Korea, and New Zealand, signed the RCEP agreement on 15 November 2020. After it entered into force at the beginning of this year, the RCEP became the largest trade agreement in the world as measured by the gross domestic product of its members – almost one third of the world’s GDP.

The RCEP is creating the world’s largest trading bloc by economic size and makes it a centre of gravity for global trade, the United Nations Conference on Trade and Development (UNCTAD) said in a study days before the pact was launched. The agreement encompasses several areas of cooperation, with tariff concessions a central principle, which will eliminate 90 percent of tariffs within the bloc.

During the meeting in Bali in May, the economy ministers of ASEAN also discussed private sector-driven industrial cooperation within the bloc as a collective effort to deepen ASEAN economic integration, enhance intra-ASEAN trade, investment and supply chain connectivity, and strengthen ASEAN’s sustainable and decarbonisation agenda, in line with the ASEAN Economic Community Blueprint 2025.